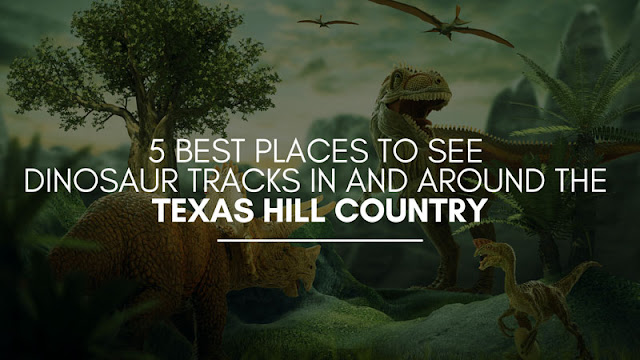 One thing not many know about Texas—it’s one of the best spots to see dinosaur tracks. If you think there’s nothing left of the dinosaurs, you’re in for a treat. We’re happy to let you know that you can still catch some epic dinosaur tracks and footprints, some as big as 5 feet wide. That’s right—you don’t need to be a paleontologist at a remote dig site to get a closer look at dinosaur tracks.

Dinosaur tracks are known as “trace fossils,” or fossilized evidence of previous life. These fossils are what have given us clues to the past habits of dinosaurs, and help us estimate their massive size and stature. Though they appear in stone today, dinosaurs a hundred million years ago weren’t leaving their footprints directly in solid stone. At the time it was mud, and over time it became solid rock, leaving behind the footprints we can see today.

Here are the 5 best places in and around the Texas Hill Country where you can get up close and personal with actual dinosaur tracks: 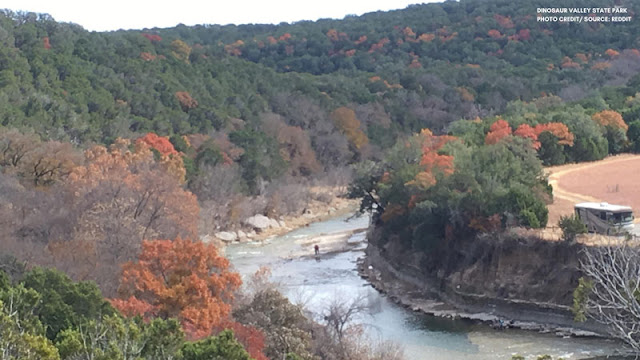 First on our list is, of course, the state park that is named after the famed dinosaur tracks, Dinosaur Valley State Park near Glen Rose, Texas. The park welcomes guests with two full-scale models at the entrance,  one a Brontosaurus and the other a Tyrannosaurus Rex. There’s plenty to do in the park, including hiking, horseback riding, and camping along the dinosaur tracks.

Before humans existed, Dinosaur Valley served as a “dinosaur highway” where both herbivorous and carnivorous dinosaurs roamed for food and prey. The tracks were discovered in 1908 after heavy flooding, over a hundred million years after their creation. Today, you can walk in the fossilized tracks of Acrocanthosaurus (a cousin of the T-Rex) and sauropods. The tracks at Dinosaur Valley State Park were the first proof that sauropods, which grow up to 70 feet long and weighed over 40 tons, walked on all fours. 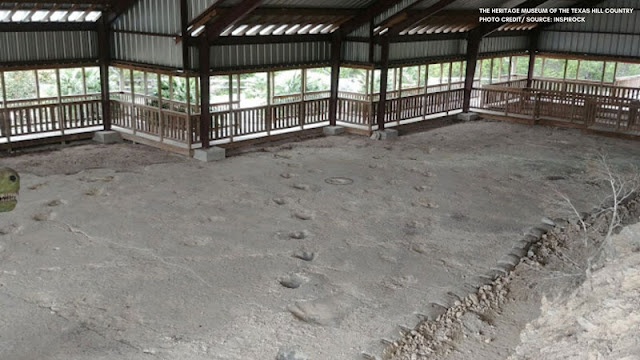 2. The Heritage Museum of the Texas Hill Country

Between Austin and San Antonio, the Heritage Museum of the Texas Hill Country boasts over 200 footprints at 28 different tracks. At over 25 acres, the museum hosts plenty of prehistoric-themed attractions. To find fossils from over a hundred million years ago, do a guided tour of the grounds, and while you’re at it, check out the dozens of tracks on the flatlands and compare the size of your foot to that of a dinosaur’s.

Whereas heavy rains can expose new tracks, some tracks already exposed to the elements can erode completely. That’s why the Heritage Museum is dedicated to protecting the exposed tracks from further erosion, providing coverage to some with a roof covered pavilion.

If you’ll be making a visit to the Heritage Museum, bring your history knowledge full circle and stop by the Native America exhibit to learn about the ancient people who migrated to and inhabited the land through the 1800s. 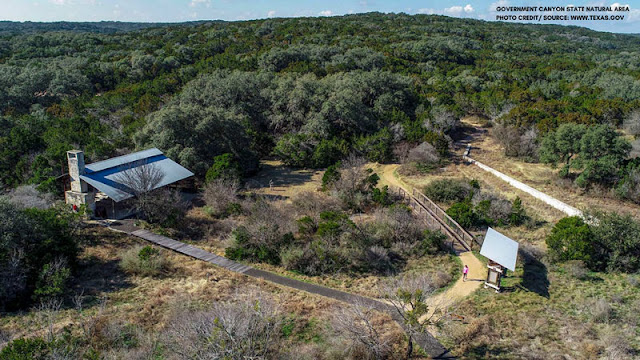 If you’re up for a hike, don’t miss out on the Government Canyon State Natural Area. Scientists believe that up to 20 different types of dinosaurs have passed through the area, leaving tracks throughout the miles-long stretch of the park. As a designated natural area, preservation of the natural environment in the park’s twelve-thousand acres is a priority.

Hit one of the hiking trails for the day or reserve a walk-in tent at one of the campsites. But be warned, the full hike is 5 miles (2 ½ miles each way). Though some parts of the trails are rugged terrain, park rangers are there to help you choose a trail that’s suitable for your group. Remember to bring plenty of water and sunscreen, wear sturdy shoes, and to plan ahead for the right weather conditions! 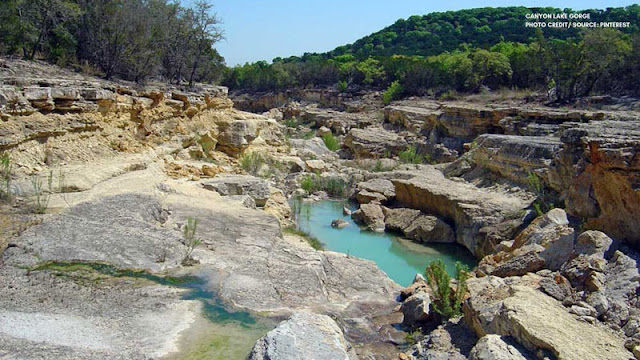 If hiking isn’t for you, make a stop at the Witte Museum in Brackenridge Park, in San Antonio, which pays homage to these prehistoric beasts in every way seemingly possible. With fossilized dinosaur footprints, bones, interactive displays, and a life-size Tyrannosaurs-Rex skeleton, The Witte Museum delivers in terms of prehistoric artifacts. In recent years, the museum has expanded to include a giant Quetzalcoatlus Northropi—one of the largest animals to ever fly. As wide as a small airplane, the Quetzalcoatlus had a 36-foot wingspan.

If you’ll be visiting from out of town, be sure to also stop by the Witte’s exhibit on South Texan Heritage, where you can see historical artifacts from Texas’ history and its wildlife. And lastly, finish off your visit with a stroll through the garden. 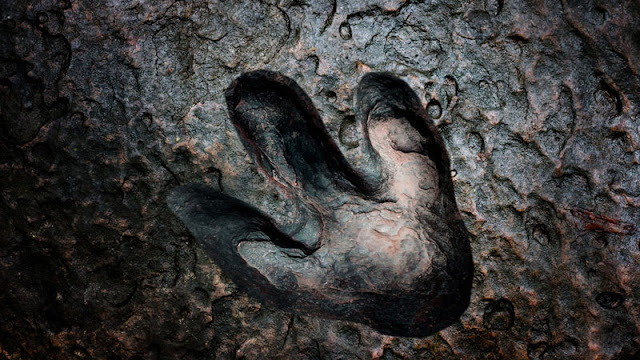 What could make a gorge even more impressive? Dinosaur tracks and millions of year-old fossils, that's what. Back in the Cretaceous era when the dinosaurs left their tracks, the gorge wasn’t yet formed. In fact, it was only exposed in 2002, when torrential rain caused a dam to overflow, flooding and carving away the sediment within the gorge to create the canyon formation and reveal plenty of prehistoric fossils and dinosaur tracks.

The Canyon Lake Gorge delivers with its dramatic scenery, rocky terrain, waterfalls, and pools. For a knowledge-packed hike, opt for a guided tour of the gorge that dives into the historical and geological aspects of the site. Take a walk in the mile-long limestone gorge, and you’re sure to find some evidence of the prehistoric world. 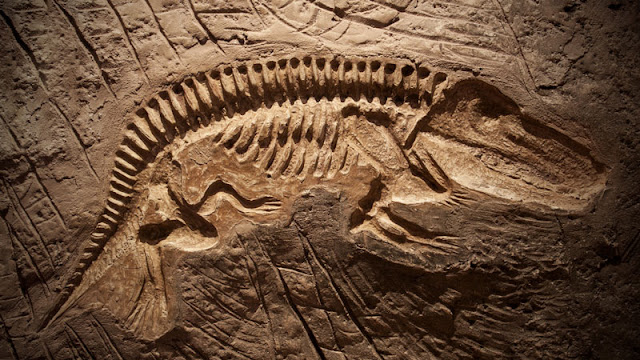 There we have it, the top five spots to catch dinosaur tracks in the Texas Hill Country. If you’re visiting Texas, it’s easy enough to fit one of these locations in your itinerary. And who knows, maybe you’ll even find newly discovered tracks!
Email ThisBlogThis!Share to TwitterShare to FacebookShare to Pinterest
Labels: dinosaur attractions in Texas, Outdoor Activities in Texas Hill Country, texas hill country attractions, Things To Do in Texas Hill Country
Newer Posts Older Posts Home
Subscribe to: Posts (Atom)